First Phase of Affordable Housing to be Completed Within The Year 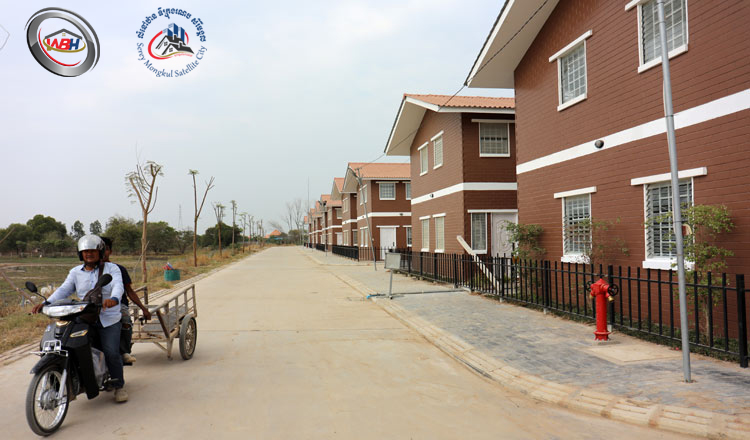 The first affordable housing project targeting lower- and middle-income families will be completed by the end of this year, according to senior staff from WorldBridge Homes Co, the company behind the project.

Serey Mongkul Satellite City on the outskirts of Phnom Penh now has 603 completed homes in its first phase with a further 2,457 houses still to be built, said Yuk Sothirith, general manager at Worldbridge Homes Co.

He said the second phase is currently 30 percent complete and added that the general infrastructure, sewerage system, water supply, electricity and road have already been installed.

Yuk also said that among the 603 houses, more than 80 percent have already been sold, with almost half the remaining 1,854 under construction sold too.

“We will hand over the houses phase by phase. Once we complete 500 to 600 houses, we will hand them over to the customers,” said Yuk. “We have planned for the whole project to be completed by the end of this year, or early 2021 at the latest,” he added.

“So far, more than 30 percent of our customers are civil servants, but this figure will most likely change from month to month,” Yuk said.

He added that because this is the first affordable home project in Cambodia, the company has defined the quality and standard, so the next developers can use this model with the company seeking to provide more value to its customers.

The project will include parks and gardens, green spaces, markets, schools, a hospital, possibly a public bus station in the project area and will reserve land for a small business cluster.

Deputy Prime Minister and Minister of Land Management, Urban Planning, and Constructon Chea Sophara said this week that this is the first project of its kind in Cambodia.

He said the government will be assisting with infrastructure such as roads to the project, water and electricity.

“This project will help civil servants, retired officials, workers, newly-weds and newcomers, all who are low-income people that need good housing,” he added.

In 2017, the affordable housing policy was drawn up by the government aimed at improving the lives of low- and middle-income earners by encouraging developers to shift their focus to low-cost housing developments.

The policy provides incentives for developers such as tax breaks and reduced red tape including approvals for construction permits and business licences, while it also allows for special rates of income tax, property tax and value-added tax. To enjoy these incentives, however, projects must comprise 100 low-cost housing units priced between $15,000 and $30,000. The projects must also be within 20 kilometres of Phnom Penh city and must feature green spaces. Developers must also cooperate with financial institutions to create credit schemes with low-interest rates to enhance the project’s affordability.

Currently, there are five projects with a construction permit from the ministry. Two are located in Phnom Penh, two in Kandal province and one in Poipet’s Banteay Meanchey provincial city, all with a combined 8,331 houses and units.